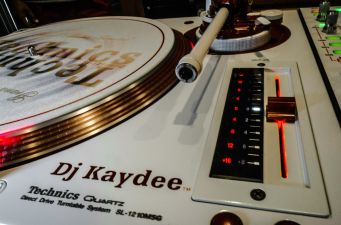 Currently as resident DJ at Clubs , PHX, DISCO (Scottsdale) and JACKRABBIT in Arizona – Kaydee’s unique sounds has kept him in demand by some of the world’s premier nightclubs and promoters across the nation including Eugene Thompson Presents and the famed Doobie Boyz Entertainment. Apparently with the current tough economy that has hit many industries, he is one of the few djs spinning more than 3 nights a week…..not to mention the frequent out of state gigs that have him on the road atleast every other week. He is also known for releasing a FREE Promo Mix CD atleast once a year hence creating the demand for his mixtapes which run out on the day of the release. Sometimes he is forced to reproduce more mix Cds to cater for the demanding fan base.Fourteen years later, Kaydee’s resume’ includes large scale corporate events such as Super Bowl Bashes, Rugby 7s and NBA All Star Weekend Events, just to mention a few. ……and a trademark name “DJ KAYDEE” which he owns full rights to both in the States and overseas.He is currently a Co-founder and a principal of Certified Party Rockers (CPR) based out of Las Vegas. As an entrepreneur he has built successful businesses from scratch. Some of these ventures include a high end clothing boutique – Studio 15 Scottsdale and an Investment firm that specializes in Real Estate and corporate housing/ Vacation Rentals. He is also the principal of Kaydee Productions – a firm that specializes in corporate events and event planning in the mid west. His recent endeavour is a Dj academy based in Scottsdale  www.scottsdaledjacademy.com that is focused on training individuals who are passionate about becoming djs.